I started growing Garlic several years ago, but never really knew what to do with the Scapes, to be totally honest I didn’t even know I was supposed to cut them off the Garlic Plant……that might have had something to do with the poor crops I was producing.

So I learned….cut the scapes and grew amazing garlic, but I didn’t do anything with the scapes other than throw them into the compost pile. 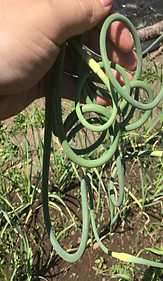 Garlic Scapes you say? What are they?

Well that was me in the beginning…so I’m going to assume the newby reading this doesn’t know what a garlic scape is either.

The scapes are the flower bud of the garlic plant.

A garlic scape comes up in the middle of the plant sometime in late spring or early summer. It is not hard to miss as it comes up and then curls around.

When the scape curls its time to harvest it, this is usually in later June. I harvested mine June 26th this year. Once the scape is removed from the plant all the wonderful plant nutrients go to the bulb encouraging it to thicken up.

The garlic scapes are delicious, they can but cut up and added to soups or stews and taste like garlic. I know some people that use them as an addition to a flower arrangement. Me well I cut them up and put them in the freezer to be added to winter stews and soups.

This year I have tried something new.

Spices to add to each jar (measurements are per pint)

Fill hot sterilized jars with the scapes, being that they are curled I laid the curled scapes flat and stacked them to the top of the jar. I then took any of the longer pieces I cut off and poked them down the middle. The left overs I chopped and put in freezer bags.

Add the spices to each jar (measurements are per pint)

Boil the water, vinegar, salt and sugar and carefully pour this mixture into your jars, leaving a 1/2″ head space.

Make sure the scapes are staying under the liquid in the jars and put the lids on.

Let the jars cool and then put into the fridge. They will be ready to test in 6 weeks and will keep in your fridge for up to 8 months.

We have tested the scapes and they turned out really good.  They taste great just the way they are and we have also found adding them to a caesar drink is very good.

Herbalists and healers have used garlic for thousands of years for treatments. The Greeks are known to have used it as a laxative whereas Egyptian healers gave it to the workers building pyramids to help build physical strength, and in the Middle Ages garlic was used to ward off the plague.

Louis Pasteur a 19th century French Chemist determined the effectiveness of garlic’s antiseptic properties with information that was recorded during the 1st and 2nd World Wars by the British, German and Russian Armies.

Since then studies have shown that garlic is effective in the fight against bacteria, viruses, parasites and fungi.

This entry was posted in Gardening and Yard Work. Bookmark the permalink.