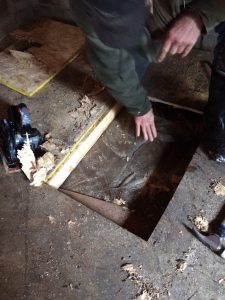 The old cabin floor had to be removed, we were almost certain that underneath the wood would be a dirt floor, but to our surprise there was a concrete floor under that dirty old particle board.

Whoever had put the floor in this cabin had built a frame raised floor and covered the concrete with particle board.

We would find out what we had to work with once the entire old floor was removed.

The plan now is to frame a raised floor again and level it up.  The plywood that will become the new floor is coming from the floor of the addition that is to be torn off.

First we would need to clean up after tearing the old floor out and get some more foam insulation from the main cabin as well as the plywood from the addition.

Instead of using poly for the vapour barrier on the floor, we have all this foam insulation so it will be used, the same insulation that was used when the roof was replaced. 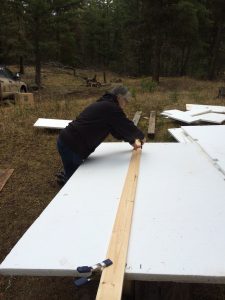 While Scott was getting the floor level and framing done, my job was to cut the foam insulation to size.

The insulation would be placed down on the concrete as a vapour barrier.

Usually poly would be placed over the concrete but we don’t have any of that kicking around and an over abundance of insulation.

Once the foam is down we can start installing wood flooring over the concrete. 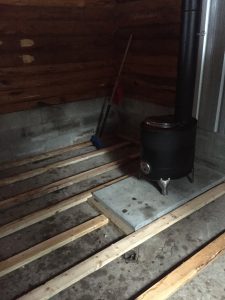 In this picture the boards have been cut to size before putting them in.

Scott will drive a hole through the lumber and into the concrete.

They he will put a piece of metal wire into the hole and screw the lumber to the concrete floor.

The wire helps to keep the screw in the concrete.

These holes were drilled about every foot or so.
small-wood-stove/

Ones the lumber was screwed down, the insulation was placed in between each floor joist.

The plywood was cut to length and placed on top of the framed lumber and insulation. 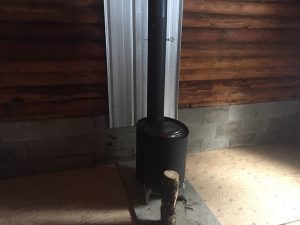 The plywood was then screwed down to the floor joist. (the lumber that was framed and attached to floor)

This was my job.

I put in one screw every 8 inches.  Believe me that plywood isn’t going anywhere lol. 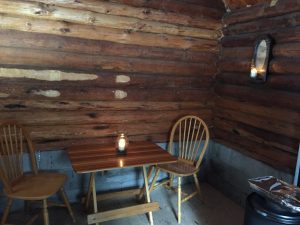 Once the plywood floor was in, it just made that little cabin feel so much better.

The next time we came to the cabin I had to bring a fold up table, a couple of chairs and some candles.

The next project is going to be to plane the walls.