Getting Rid of Pack Rats 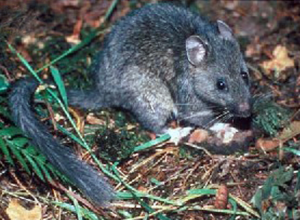 Where do Pack rats live?

Where do pack rats live?  Well apparently they live in my Cabin.  Well I’ll give you some Pack Rat information and then I’ll tell you my story and give you some ways to get rid of these nasty creatures.

The pack rat or the busy tailed wood rat, is about the size of a western red squirrel.

These rodents will not only leave a mess if they nest in your house, the smell is absolutely terrible.

Any old or abandoned building in our area will soon be over run by Pack Rats.  These rats like to build their nest in sheltered areas, so old abandoned homes are a perfect place.

The pack rats nest is made of woody material and a variety of other things. 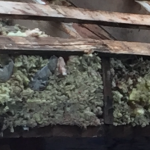 They really seem to like insulation, if they can get there hands on that it will surely be part of the nest.  Pack rats really like shiny objects and will take pieces of tin foil etc.

These nest can range in size from 2 – 5 feet in height and diameter so if you have a cabin in this area, you want to make sure they can’t get in.  They can cause so much damage in a short period of time.

These rats can really do some terrible damage, they will chew through wiring, shred upholstered furniture apart, pull insulation from the walls and even rip apart a mattress in a very short period of time.

My mother in-law parked her car at a friends out in the country and was spending a few days there, when she left everything seemed to be okay, but then the car started acting up and to make a long story short.

A packrat had got in to the wiring and had travelled with her as it was destroying the wiring.  In the end all the wiring had to be replaced.

If you have a pack rat in your cabin or house you will probably want to trap them.

When we first bought this property we knew it had been empty for awhile so no doubt there would be packrats.   There was!  We removed three nests from the house and the smell was unbelievable.

Trapping was a daily job for the first few weeks.  I had three traps set and some days would get three rats.  It was mating season and they must have been having many babies, because I think in the first month I trapped about 20 pack rats.

We had to find out where they were coming in and plug up there entrance.  Scott would find a spot plug it and figure we had it and then again another one.  Finally we realized they were coming down the chimney of all places.  So the fireplace is now blocked.

Hopefully I have seen the last of these creatures.

All the floors will eventually be replaced, I have scoured them with pinesol to get rid of the smell, the log walls have all been washed and I could still smell that terrible smell, not so bad but it was still there.

One day we decided it was time to rip the kitchen cabinets out and there behind the cabinets was another nest.  I hope that will be the end of it.

Live traps are available to trap pack rats.  Once trapped you just relocate them to another area.

There are electronic rat traps out there, too expensive for me.

and just recently I found a solar (because we have no power) pest repeller.  This will be put up at the cabin after winter and hopefully it will scare any of those rodents away that may want to set up camp this coming mating season.

Trapping pack rats might seems easy, just set a trap and the pack rat will come.  It’s not always that easy.  I have let the trap off trying to set it and somehow those packrats can take the bait and leave the trap set.   Oh yes! 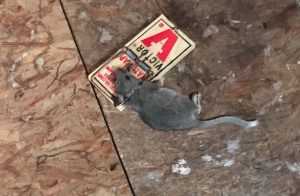 I have tried many of these and having this great battle with them after buying this place, I finally came up with what works for me.

They seem to really like almonds, so I wrap the almond with wire and attach the wire to the trap.

This way when those smart creatures think they are going to take the nut, they have to tug at it and wha la!  I’ve got a rat.

Now saying that, there were a few smart ones that still managed to get the nut out without setting the trap off.

The pack rats no longer live in my cabin, but I’m still cleaning up after them, the solar pest repeller will be put up there this spring and hopefully that will be the last of the Pack Rats.

Update – a product that really works!

Since writing this articl

e we found a product that work so well for getting rid of rats, mice and squirrels.

It doesn’t kill them, just deterred them from wanting to be around.

We have tested this product since spring and I can very happily tell you that there has not been one mouse, rat or squirrel in or near the cabin.

This is a solar product that produces a sound that keeps the critters away.  My life is so much better now!

It works so well, the neighbors have bought them to keep the moles away from their greenhouse and strawberries.  There is a bumper crop of berries this year…….
Mole Repeller Ultrasonic Solar Snake Gopher Repeller Mice Rats Rodent for Lawn Garden Yards (Mole Repeller)

Other ways to get rid of rats, mice and other pests

4 thoughts on “Getting Rid of Pack Rats”