Bear in the Yard

There is always the potential of a bear encounter out at the property, the last few summers I’d see one almost every time I drove out to the property. 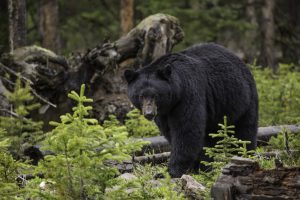 I not all that comfortable hiking in the bush along as I’ve always been a little bit paranoid when it comes to bears.

Not always, but some of the time I will insist that we bring the rifle with us, especially when we are doing over night trips.

Once time I remember we had the travel trailer set up, the rifle was leaning up against the trailer and we were about 40 feet away sitting by the fire having a beer and relaxing after a day of work.

We were quiet, just chilling and I look up and say “Bear” it was walking into camp oblivious to us being there and there he was standing right beside the rifle.

Scott got up and yelled “outta here bear” twice and I got up quickly grabbing my phone….. because I was going to get a picture of course, but by the time I turned around the bear was nowhere to be seen.

I think he was used to having the place to himself and didn’t expect to come upon any humans.

There had been signs that a bear had been around.  A couple big piles of scat right near the front door of the main cabin. 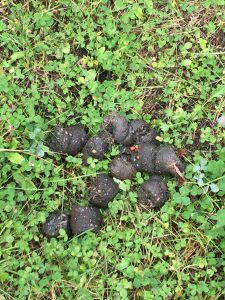 After this encounter we came across bear scat twice more in the yard area.  Scott says to me “if you are going to have pets you need to clean up after them”

Well I’m pretty cautious now when I go up there on my own and so I thought I better to some research.

I don’t know if I heard it somewhere or just thought if a person were to mark their territory (pee around the perimeter) that the bear would not be interested in coming around.

Well that’s easy I could do that!

So I did some research on this and it seems there are claims that it works and some that it doesn’t.  Brings up another question.

Some things people have said are:

Urine smells and bears are interested in anything that smells

The salt in urine will attract bears

A few people have said to pee high in a tree

Scent trees surrounding your area with your urine, but 100 to 150 feet away

So for me the jury is still out

Not sure I’ll rely on the urine fence

Here are some other things I learned:

Spring, summer and early fall are the times bears are around, I need to be aware of my surroundings.  Is there bear scat around? Are any of the trees marked up?  Just look for signs.

A bear’s sense of smells is better than a dogs, it’s said to be seven times stronger than a bloodhound. 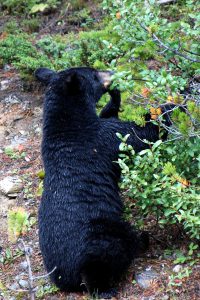 The Black Bear of Lake Louise

Natural food area will attract bears such as berry patches.

If there has been a mild winter it can mean that game such as deer are stronger which in turn leaves the bears out seeking food.

Also if there is a late winter or dry spring there will be fewer berries.  These conditions can produce hungry bears and those we don’t want to run into.

Soaps, lotions, deodorants, food all these scents can attract bears so be careful to put these things in containers that have tightly sealing lids.

I have learned that bears don’t like noise like the one Scott yelled at; it took off in a shot.

So I am planning on hanging up some wind chimes this spring particularly near the main cabin and one outside the small cabin.

Hopefully that will keep the bears away from me.

This entry was posted in Wildlife and Pests. Bookmark the permalink.

2 Responses to Bear in the Yard