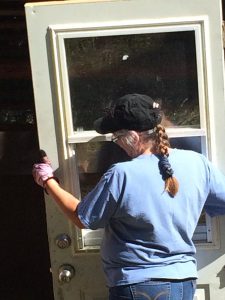 The existing front door is damaged so we will be taking an exterior door from the addition to the main cabin and use it.

The additions will slowly get taken down and we will be re using whatever building supplies we can.

Like the window replacement…….I am going to replace a door for the first time.  Taking the two doors out was the easy part.  Just take the pins out of the hinges and out comes the door.

Removing the two existing doors was pretty straight forward.  Just remove the pins and take the door off the hinges.

Then the door jamb had to come out of both doors, the front entrance door was not put in to well and part of the door jamb was missing.

How to replace a door frame

I’m not an expert on this by any means, but I had some verbal help.  Once the door frame or 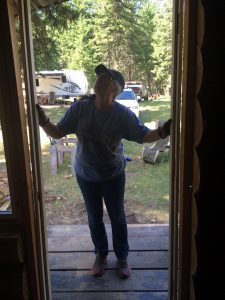 jam or whatever you call it was out. LOL.

Then I had to replace the front door jam with the one I had taken out of the addition.

It slid in very easily.

Now it has to be level and squared up.  So I learned that you level the hinge side first.

Taking some small wedge pieces of wood that Nathan had cut up earlier I slipped them in between the door opening and the door jam close to the hinges and once it was level I put a couple screws in to hold it into place. 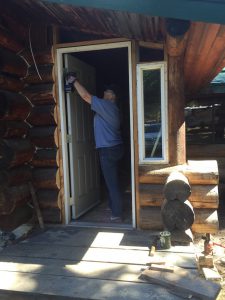 Then the other side was done the same way and everything was screwed in place.

Now it’s time to attach the door to the hinges. I must have taken instruction pretty well, because I surprised myself when everything fit together so well.

The additions as I have mentioned in other posts will be torn down, so for now the door opening will be closed off until we need to get in there.

The addition has plywood, insulation, windows and lumber that we can use when fixing up the main cabin and building a new wood shed, greenhouse etc.  We will salvage whatever we can.

Now that the door and window have been put in the spaces above them will need to be filled in to keep the critters out.  The addition was skirted so I took a piece of the skirting off and cut it to size and screwed it up above the window and door.

This will be a temporary fix, but as long as nothing can get in we should be good and can putter away when we feel like it.  The Small Cabin will be finished first.

2 thoughts on “Hang a front door in the Main Cabin”