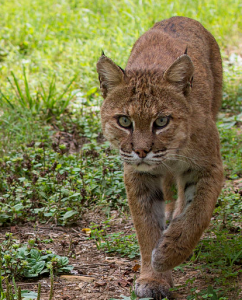 Difference between Bobcat and Lynx 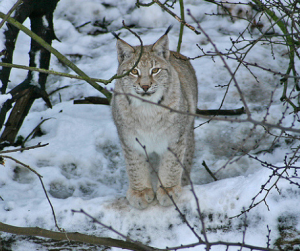 Coming back from the cabin the other day we encountered a bobcat or was it a lynx?

I had never seen either so was not sure which one it was.  My husband had and informed me it was a lynx.

Lynx are a very solitary animal preferring to hunt and travel alone, they are rarely seen in the wild which makes it even that more awesome that I was able to see one and sit and watch it watching us.

Not knowing at first whether is was a Bobcat or a Lynx I wondered what the difference was between them.

So of course I had to do some research and I found:

There are three different species of Lynx:

Spanish lynx which is rare and lives in Portugal and Spain

The Canadian Lynx is the one I saw as pictured, this species likes forested areas that have a variety of ne 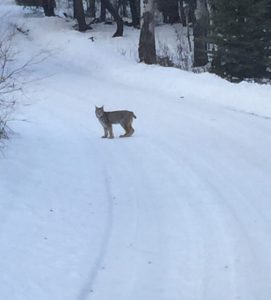 The snowshoe hare is the Lynx favorite food; these hares tend to live amidst dense young forests where they can feed on the boughs of young trees sticking out above the snow, and when they are in abundance the Lynx will be hunting them.

The Lynx will den in older forests where downed trees and dense undergrowth make the best location, they will use a fallen log, rotted out or root system of a tree rather than build a den.

A simple dip in the ground covered by plant growth will work for a Lynx.

As far as their food source they are not limited to the snowshoe hare although it is the preferred diet; they will also feast on grouse, squirrels and mice.

They mate during the winter with a gestation period of about 65-70 days after which they will give birth to 1 – 5 kittens.

Four kittens is the average, these kittens will stay with their Mom and learn to hunt for about a year.  The male has nothing to do with raising the young.

When the Lynx makes a sound it is very similar to a house cat only louder.

Bobcats in Comparison to the Lynx

In comparison to the Bobcat a Lynx has longer tufts on its ears and longer, larger paws.  It is mostly grey in color and unlike the Bobcat it does not have a black tip on its tail.

The bobcat likes a variety of habitats than include the forest as well as swamps and marshes as well as brush lands.

A bobcat is smaller than a lynx and looks much the same as a house cat.

In comparison to a lynx the bobcat has shorter tufts on its ears, smaller paws, shorter legs and a striped, black tip on the top of its tail.

The Bobcats diet is similar to the Lynx as it consists of rabbits and hares, but they also eat mice and birds

Like the Lynx the Bobcat is also a very solitary animal.

The bobcat will often have more than one den within its territory.

The den will often be a cave or rock shelter, but like the Lynx can also be a natural den made from a fallen tree or depression in the ground surrounded by vegetation.

They mate throughout the year with kittens born in the spring after 50 – 70 days gestation.

A litter will we anywhere from 1 to 6 kittens.  They begin to learn how to hunt around 5 months and stay with Mom until they are 8 to 11 months old when she sends them on their way and out of her territory.

So it seems that the difference between Bobcat and Lynx are not that many at all.  The habitat varies a little and they are a little different in looks, but there are a lot of similarities as well.

2 thoughts on “Difference between a Bobcat and Lynx”