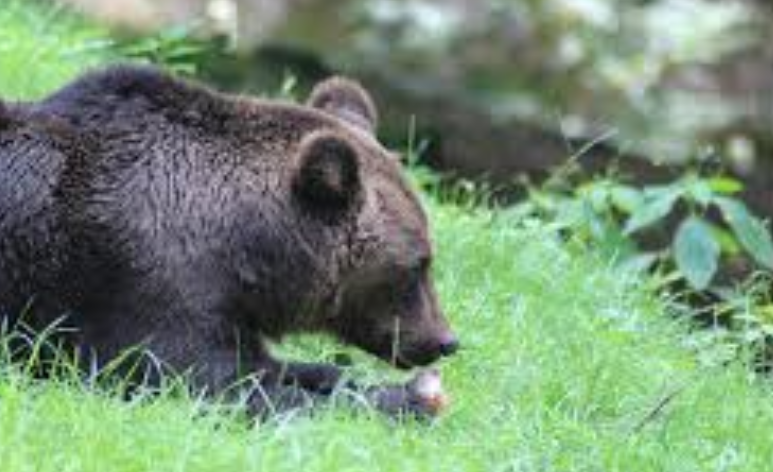 We have never had problems with bears before, but the last while I’ve had a Black Bear in the yard that has decided to harass my chickens. 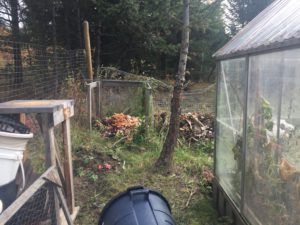 The first night Mr. Bear tore down the back fence and rummaged around in the compost pile, but didn’t really eat any of it just had a look through it. I’m surprised he didn’t munch on the apple cores, beet peels and many other delicious things in the compost. It’s been weeks of putting food up so the compost is overflowing with wonderful bear treats.

May because he had spent the last two nights eating apples at the neighbors house.

Normally I would throw a layer of dirt over the compost after dumping the scraps, but I hadn’t had time to bring a wheel barrow of soil over yet……note to self. Make sure dirt pile is beside compost next year.

So I’m sure the smell of the compost is what brought him in, but once there he discovered I had chickens and ducks! I’ve learned it was there food he was after.

Mr Bear tried to get into the coop by trying to dig under the wire on the backside of their outer run….he didn’t succeed, I think my husband is pretty good at building bear proof chicken coops.

Here’s some pictures of some of the damage he did:

Regardless I was getting worried about my poor chickens as they say a bear will eat or swipe at and kill any chickens in its way, so far my chickens have been very lucky.

Well the next day he came back and being a pretty smart bear simply tore the latch off the door to the pen and walked in. While in the run he knocked over the large feeder and proceeded to have dinner all while the chickens and ducks were in the house.

Finding the way In

The next day of course I noticed what he had done, I was one my way to work so quickly

found a bungy cord hanging by the coop and tied it around the door and fence to close the door. I was so surprised to see that I had eggs to collect. I would have thought those poor animals would have been so scared.

Well Mr Bear left it the next night, but tried to get into the run by pulling down the fencing, he didn’t pull it down far enough to get it, but made up for it the next night when he chewed off the bungy cord, and ate what was left of the chicken feed and knocked over the water and the ramp for the ducks and chickens to get in their house.

Again the ducks and chickens were unscathed and produced eggs. I think I’ve got some pretty special birds.

I was getting pretty nervous about being outside and having a bear hanging around, so I called the Conservation Officer and he came out to have a look. He found some blood on the door, so I guess Mr Bear cut himself on the fence at some point. So the decision was made to bring a trap and relocate him…….but it snowed and Mr. Bear has not been back since.  Hopefully he is sleeping for the winter and won’t return in the spring.

I learned that chicken feed is very high in protein and bears love it. I’m still surprised that the bear so concentrated on getting into the pen to the feed can, when not 5 feet away where three plastic garbage cans – each full. One with chicken scratch, one with laying pellets and one with crumble.

I guess this was a busy year for bears according to the Conservation Officer, and as we found out at the off grid property as bear signs were everywhere.

The neighbor that lives a few miles away told me he saw a grizzly, I’ve heard of the odd grizzly siting in the area but they are not normally in our area…..maybe now though.

Out hunting on thanksgiving weekend our daughter-in-law found what was left of a black bear just down beside our spring which gives up water. Most likely killed by a grizzly……..