Don’t run and don’t back down!

I want to tell you a little bit about cougars before we get into what to do if you meet a cougar out in the bush while hiking. 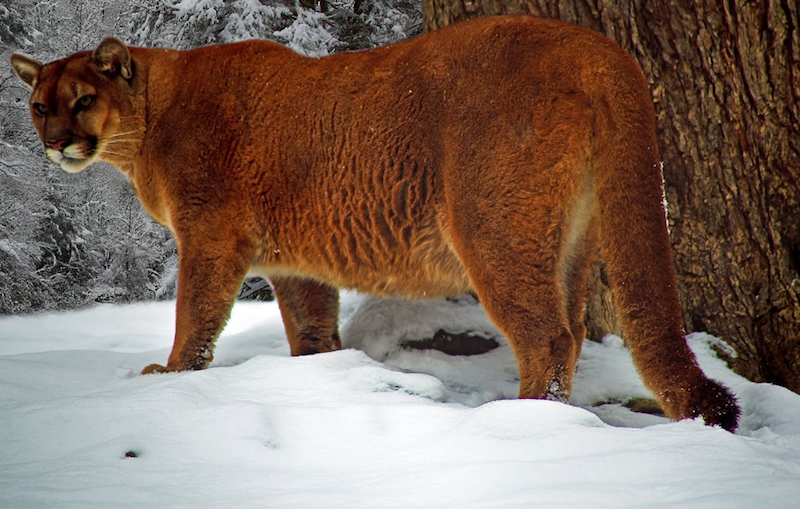 Cougars are very rarely seen in the wild, they like to stay to themselves.  In the 30 years I have been living around cougar country I have only seen one and that was from a distance, it was walking away from us as we were out getting firewood.

The top running speed of a cougar is between 60 and 80 km per hour, they are very good climbers and can swim but they like other cats are not really that into getting wet.

A cougars life expectancy in the wild averages eight to 10 years although they have been known to live as long as 20.

The female cougar will have a litter every two of three years.  She will be pregnant with that litter for approximately 90 days.  The female cougar is very protective of her cubs and she is the only parent involved in parenting these cubs.  The female will usually have a litter or two, but can have up to six babies.  These babies are taught to hunt and stay with Mom until they are about 2 1/2 years old at which time they are on their own.

Cougars feed on meat for survival and this consists of mainly deer.  An older cougar or a sick one will often prey on cattle and other domestic livestock as well as dogs, but if they are healthy and the deer population is abundant that is the first choice for this animal.

These animals need at least one large kill every couple of weeks to survive, but when the female has young that would increase to more like every few days.

Here is a picture of some cougar track on our sledding trail.

It’s like it followed us last time we were out, because the tracks were in our sledding tracks for miles.

There were lots of deer and rabbit tracks as well, so I’m guessing he was more interested in them then us on a couple noisy machines.

A few days later we were out again and came across wolf tracks on one side and cougars on the other as shown in the photo here.

I was lucky enough on the way back to see a wolf crossing the road; another animal that you don’t see very often.

What to do if you meet a Cougar?

Cougars will normally avoid confrontation, but they are not predictable so be on your guard.

You don’t want to run or back away from this animal, you want to make yourself look as big as you can.

What to do if the Cougar seems aggressive of attacks

According to the ministry of environment in British Columbia, Canada where they have a large cougar population.

The 100 years up to 1996 there were a total of 5 people killed in BC due to cougar attacks, and 4 of them were on Vancouver Island.

In that same period of time there were 29 attacks that were not fatal and 20 of them were on Vancouver Island, so it would seem that attacks on people are really not all that common.


How to prevent or avoid a cougar encounter

My 4 children were hiking in the bush when they were younger, they had the dog as they always did.

There were just coming up to a field where the cattle were and the dogs hair went up and it started barking like crazy…..there was a cougar about to go after a young calf.

Well when the cougar heard the dog barking it turned and started coming toward it and the kids.  The kids stood still in fear I’m sure as the dog tore after the cougar, the cougar turned around and the last the kids saw was the cougar heading into the bush with the dog full throttle behind it.

Thankfully the dog was protective of the kids, they quickly made their way home thinking that was it……the dog was gone, but not to long after they arrived home so did she completely unharmed.

The kids were excited to say the least they said that cougar was huge!  It was as least 7 1/2 feet long.

So I’m thinking it must have looked huge to these poor scared kids, but as it turned out a trapper was out and not far from were the kids were and came across an old cougar that was after another calf.

He shot it and turned out it was almost 8 feet in length and very old.  It was preying on the calves because it was to old to hunt anymore.

Cougars don’t really want to see us anymore than we want to see them. They are very solitude creatures and most people will never see one in their lifetime.  If you have had an encounter with a cougar and would like to share your story please do.

2 thoughts on “What to do if you meet a cougar?”